From Star of Dutch Theater to Challah Workshops – Tishrei, 5775 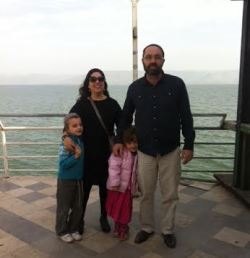 She tried hard to hide her Judaism, which she considered a burden. The actress and singer lived with her non-Jewish boyfriend, and was a star in the world of Dutch entertainment. Then, at the peak of her career, Smadar was given a role in Fiddler on the Roof. She was to play Chava, the rebellious daughter who marries a non-Jew, and her spark of Jewish identity was kindled.

Smadar Morag was born in Israel and grew up in Holland. She was a successful and famous actress who was twice nominated for the Dutch equivalent of an Oscar. She acted before thousands of people on the biggest stages in Europe. Today she lives in Israel, keeps mitzvot, and continues to act. The setting has changed; she no longer appears in theaters but in synagogues, community centers and homes, and her audience is confined to women. She uses her talents for events with Jewish value – running a function dedicated to separating challah in accordance with Jewish law, telling the story of her life, lifting people’s spirits, bringing light to

The Burden of Being a Jew

Smadar was born in 1970, and has three younger brothers. Her father was of Egyptian ancestry; her mother, Evelina, was originally from Holland. The sole survivor of a large extended family, Evelina was saved by her mother’s resourcefulness in convincing a non-Jew to adopt her. The non-Jew was recognized as a Righteous Gentile, but she raised Evelina as a Christian, only telling her when she was twenty years old that she was Jewish. At that point, Evelina moved to Israel.

Smadar’s parents decided to move to Holland after the children were born. Though their home was traditional, Smadar didn’t connect to her Jewishness. Having heard that all her mother’s family was killed in the Holocaust, Smadar understood that being Jewish was “different” and a burden. She did her best to be just like all her Dutch friends. 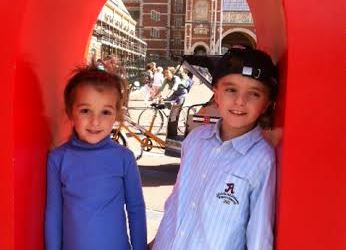 Smadar was the class clown. She was always singing and acting, in the school’s theater productions and at recess. Her parents moved back to Israel when she was fourteen, but Smadar didn’t acclimate well and returned to Holland when she turned eighteen. She lived alone in Amsterdam and decided to seek work in entertainment. She registered for a theater school, and lived a typical liberal student life. She was disconnected from Judaism and lived with a non-Jew for seven years. Her parents were upset about the relationship. Her father cut off all contact with her, and for seven years Smadar didn’t go home. The lack of connection with her family left her feeling abandoned and lonely, but she was determined to live her life the way she saw fit, without bowing to her parents’ expectations. When she graduated theater school, she became a successful actress, and found roles in many high-quality shows.

Theater of the Absurd

Fasting on Yom Kippur was Smadar’s only connection to Judaism. Apart from that, she hid her Jewishness for fear that it would stand in the way of her receiving good roles.

When she auditioned for Fiddler on the Roof, she was given the role of Chava, the rebellious daughter of the family, who marries a non-Jew. The producers knew that she was Jewish, and felt that her Jewish appearance would be an excellent marketing gimmick.

It was the first time in her life that Smadar found something good about being Jewish.

Fiddler on the Roof’s Chava has a lot in common with Smadar. Both are the oldest of four children, and both decide to spend years of their lives with a non-Jew. Chava’s father tears his clothes in mourning for the loss of his daughter, and, like Smadar’s father, he severs contact with her.

In rehearsals for Fiddler, Smadar found herself wearing modest clothing most of the day, lighting Shabbat candles as part of the play, listening to Jewish music, and answering countless questions from her friends, non-Jewish actors and actresses who wanted her to help them “get into” the story. They expected Smadar to give them a full understanding of what it is to be Jewish. Before Passover they even asked her to supply them with matzos. It was their encouragement that led her to become a more observant Jew.

Smadar’s father came to the first performance of Fiddler. She was very surprised, and touched. Her father’s childhood dream had been to become an actor and singer, but his life hadn’t worked out that way, and he lived his dream vicariously through Smadar.

She knew how her father would feel when he saw her acting the part of Chava. When Chava says to her father, Tuvia, that she’s chosen to marry a non-Jew, Tuvia decides to act as though she was dead. After the performance, Smadar’s father came to her and, by way of breaking the ice, said, “Do you see? Tuvia agrees with me.”

After opening night, Smadar was interviewed by all the Dutch media. They all wanted to feature the Jew who performed in Fiddler and Smadar was famous.

A Performance of Fiddler on the Roof. Smadar is on the left.

An Earthquake in Both Senses of the Word

On August 17, 1999, an earthquake shook Turkey. Tens of thousands died. Smadar was in the throes of filming a reality show, “Tehilla,” when her mother called to tell her the news. Her father’s family – his sister with her husband, their son and daughter-in-law and their two children — were killed in the earthquake.

Smadar left the film set to attend the funerals of her aunt’s family. Her father took the tragedy very hard. He said that his wife had survived one Holocaust and this was his Holocaust. Smadar felt that their lack of faith made it impossible to deal with the tragedy. She returned to Holland to extricate herself from her long-term relationship with her non-Jewish boyfriend.

He’s Religious and She’s Not

Smadar met Yigal at a party for Israelis. They hit it off right away and six months later, in 2002, they married.

A few months after the wedding Yigal became interested in Torah and mitzvot. Smadar would have none of it. When kippah-wearing men had been suggested to her before, she refused to meet them. She was disappointed in Yigal. His budding connection to Judaism felt like a betrayal.

Yigal didn’t pressure her to change or to start keeping mitzvos, but Smadar did her utmost to convince him to return to being the irreligious man she’d married. It didn’t work. Yigal became increasingly religious.

Two years later, Smadar became pregnant, but the differences between her and her husband were growing. He was keeping Shabbat and going to the synagogue; she was spending Shabbat acting in theaters and on television.

“What kept us together in the end was our respect for each other, and excellent communication. He respected me even if I was irreligious. I had less respect for his mitzvah observance, but I loved him anyhow.”

Smadar gave birth to their firstborn son, Danel, and took a year and a half off work to spend time with him. But the terrors she’d suffered after the destruction of her father’s family in the Turkish earthquake resurfaced after the birth. She went for psychotherapy, and at the same time started discussing her fears with her husband. She saw faith as the best remedy for fear, so they began discussing faith regularly. Smadar grew much stronger as a result and learned to cope.

A Fateful Shabbat in a Hotel

Smadar continued to act on Shabbat. One week, her husband suggested that they spend some time together in a hotel over Shabbat. “We went to a hotel in Belgium, where I was acting. My husband brought everything: a hot plate, candles, a Shabbat kettle, meals and dishes. I saw the effort he made to spend Shabbat with me. I was appearing in The Jungle Book, which was geared to families, so it ended early. After the show, all the performers went to a restaurant, and they invited me, but I went back to my hotel room. I was enchanted by what I saw. A white tableclothhad been spread on the table I’d used while applying my makeup, a few hours ago. The candles were lit, and there was an incredible smell wafting from the food on the hot plate. Danel was sleeping and we made Kiddush, washed our hands, and ate. I was hypnotized. I felt like my husband had brought Shabbat to me. I experienced the special connection Shabbat makes between the members of a family, and everything in me that was ‘anti’ began to fade.” Shortly after that, Smadar decided to keep Shabbat. 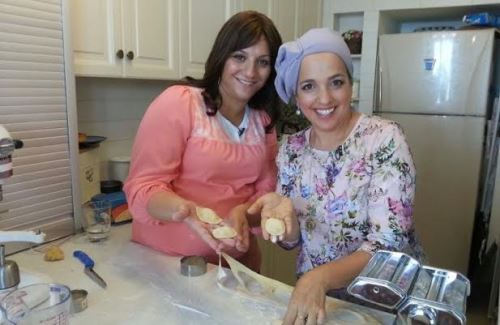 Smadar on a cooking show aired on the Hidabroot channel

The Revolution is Complete

The theater world didn’t take well to Smadar refusing to work on Shabbat. She lost her principal source of income and had to think of creative ways to continue working in acting and singing while keeping Shabbat.

“I became a freelance actress and a moderator on television,” she says.

At the same time, she became more religious. She went to Torah lectures and became friendly with people in the religious community. After a long time, she began keeping more mitzvot; kashrut, modest dress, family purity, and more.

At the height of the teshuva movement, Yigal and Shira decided to move to Israel. They didn’t want to raise Danel in Holland, where skullcaps and other signs of Jewish identity had to be hidden. Immediately before Passover, the holiday celebrating the Jews’ exodus from Egypt, the Morags told their parents that they were moving to Israel.

A few months ago, Smadar attended a wedding in Kfar Chabad, where she met Rabbi Jacobs, one of Chabad’s emissaries in Holland. She’s known him since she was a little girl. He recognized her and was amazed to see the changes she’d made and the two young children at her side.

“Rabbi Jacobs has been part of my life forever, but we hadn’t run into each other since I became religious. When we were little kids living in Holland, we were in the same Christian school. My parents asked a Chabad rabbi to come once every two weeks to teach us a little about Judaism.

“The rabbi came every two weeks. He travelled a long way to teach two children about Judaism, for free. Later, when I was living with my non-Jewish boyfriend, he came to my house to have a heart-to-heart talk. He didn’t try to convince me to leave the non-Jew because he knew I’d throw him out of the house. He just asked that I make every effort to patch up my relationship with my father and show him some respect, as Jewish law demands.

“When I met him a few months ago, he told me, ‘I remember sitting on the couch in the house you shared with your non-Jewish boyfriend and having a heart-to-heart with you. Who would have believed that you would not only leave him, but become religious, move to Israel, and raise two children as Jews?!’ 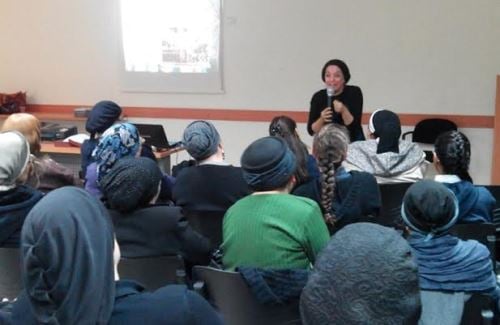 “I was lucky,” Smadar says. “It’s true that I no longer appear on stage in front of thousands of people, as I used to, and I’m not a star like I was in Holland. But I’m doing what I love. I’m making women happy, singing, acting, doing stand-up, and getting incredible, warm feedback.

“I used to be a theater star, but the satisfaction and the joy I get from doing a challah workshop in someone’s home is far greater. I know that I’m doing something that has a real spiritual effect. I’m not working to satisfy my ego or for fame, but because I have a mission.”

Translated from the Hebrew by Esther Rabi

2 Comments on From Star of Dutch Theater to Challah Workshops – Tishrei, 5775